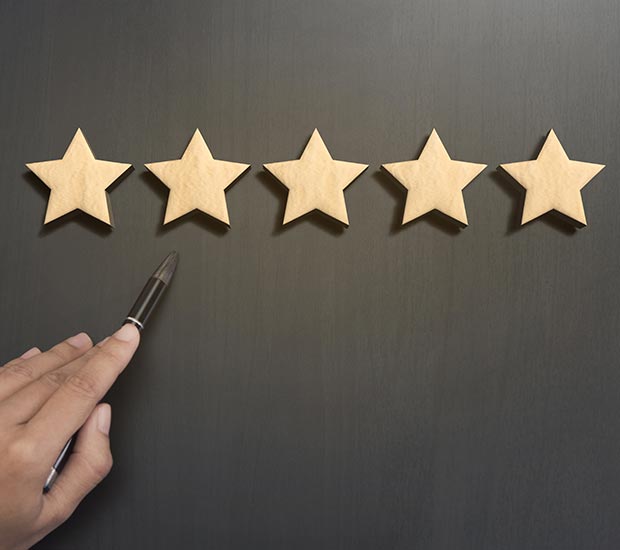 On this page, you can read some of the reviews our patients have left in the past. We thrive on feedback from our patients, and encourage you to share your experience with us, at any stage in your treatment. If you have the time to leave us a review, please click on the Review us on Google button below. Thank you for taking the time to evaluate us!

Review us on Google
Request An Appointment

I love Dr. Harrison!! He is a very caring and great dentist. We have been going to his practice for the past 4 years. He did both of my kid's braces. We have been very pleased with his service. My kids don't even complain about going to the dentist.

The receptionist, Jill, is the Greatest! The entire staff is Exceptional! I couldn't have had a better experience! Dr. Harrison is very professional, caring and most of Gental!!!

After an utterly disastrous experience at another dentist, I called a highly rated office (found here on Yelp) and was told that they only did oral surgery, but not general dentistry. Well, back to the drawing, board, I thought. But they asked why I was calling them, and I explained my awful experience and they were happy to refer me to Dr. Harrison's office.

I called, and was able to get an appointment rather quickly (which, admittedly surprised and a little bit worried me). But they came recommended, so I'll give it a try.

I showed up at (ok, this is Atlanta traffic, it really was just after) the appointed hour, and was handed the standard stack of forms. A few check boxes later, and I'm whisked away to the back. Sprawled out in the oh-so-comfortable (ok, it's standard issue) dentist chair, and get to explain (again) the debacle and why they have week-old x-rays from another dentist's office, but they're doing a cleaning. An appalled hygienist later, and she starts poking around briefly.

No major abnormalities, and a standard cleaning is in order. (No high priced, super deluxe car salesman treatment necessary here!). I asked about the gum measurements performed previously and was told that a couple spots were a touch high, but not enough to panic over, but rather just keep an eye on. A couple cavities to come back for, but overall an as-expected experience.

These people are so nice! The Doctor is very knowledgeable, friendly and honest.

Best staff. Plus the Doc really cares and that goes a long way with tooth pain.

I love having Dr. Calvert Harrison as my dentist. He is diligent and sensitive to my needs and concerns as a patient. He's got a friendly staff behind him here too. I'll be coming as long as I live in ATL.

The best dental staff I've encountered. Everyone was very patient, understanding, and comforting during my experience. I feel like I made new friends after visiting their office at Lenox Pointe. Also - highly affordable compared to other dentists I've seen. Recommended!

I honestly can’t say enough about how great I feel when Dr. Harrison and his staff service me at my appointments. I trust him with my dental health and he’s always made sure that I was both comfortable and making the best decisions when it comes to procedures. His follow up and flexibility even when I’m not in the office is amazing. If I have a dental emergency, he will accommodate me as best as possible. As someone who has never been fond of going to the dentist, I’m always happy to come to his office.

I had to get an emergency wisdom extraction. When I say it was the most painless experience would be an understatement. Thanks Dr. Nguyen.

Dr.Nguyen is awesome. I had a smooth wisdom teeth extraction experience and he smoothed out chips on my front teeth perfectly. He really cares about the oral health of all of his patients. Thank you!!

Dr. Harrison and his staff are absolutely wonderful! I took my 2 children (ages 10 & 12) this morning for routine exams/cleanings as new patients. A couple of cavities & and a much-needed extraction (baby tooth) was found during their exams. Not only were the issues taken care of today instead of having to schedule separate appointments, Dr. Harrison made my children feel at ease during the novacaine shots and the procedures! I will definitely be recommending Best Care Dental to my family and friends!!!